Where to Retire Why Virginia Retiring in Virgina WHY NORFOLK 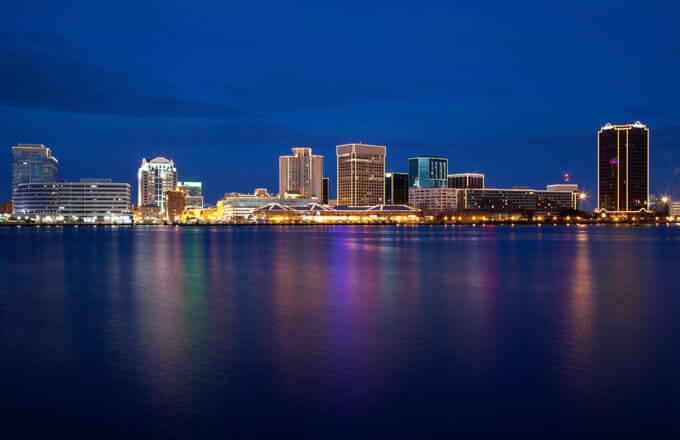 Why retire in Norfolk?

Well, in short... it's quiet, homey and affordable with a beach!

The city is known for its scenic natural landscapes and cultural diversity. With the Atlantic Ocean in your backyard, you can experience moonlight walks and leisurely sails.

The low housing prices, quality of life and healthcare also make it a desirable place to relocate.

Now, let’s take a deeper dive into the top reasons to retire in Norfolk, Virginia.

Social security benefits are not taxed in Norfolk, while retirement accounts are deductible up to $12,000.

Retirees above 65 whose net income does not exceed $67,000 per year can also enjoy tax relief. What’s more, pension income is only partially taxed with anything below $12,000, being tax-free.

Low-income earners are exempt from property taxes and for those above the limit, the rates are generally less than 1%. While specific rates will vary, homes valued at $400,000 will average around $3,000 in annual taxes (less than $300 per month).

Norfolk offers quality healthcare that is pocket-friendly and within a reasonable driving distance. The state of Virginia also offers affordable health insurance plans that can save you money.

Along with an assortment of medical facilities and wellness centers, retired military personnel can take advantage of the VA hospital.

The cost of living index in Norfolk is 99.9 or 0.1 cheaper than the national average. This score is determined by factors like transportation, healthcare, housing, groceries, and goods/services.

If you’re looking for a home, the median price of $185,000 is below average for an ocean-access city.

Norfolk experiences moderate weather during winter and summer with temperatures rarely dipping below 22°F or going above 95°F.

Fall can still be quite warm in September (65-79°F), with the lows and highs dropping roughly 10°F per month.

By December, it's wintertime (36-52°F) and the lows/highs are similar in February and March. January is the coldest month of the year (33-48°F) and the most likely to get snow.

The annual precipitation in Norfolk is 45 inches - an average amount throughout Virginia.

The wettest months are in summer (July/August) with between 5-5.5 inches per month, and a decline through mid-fall and spring (3-3.5 inches/month).

If you’re a sunshine enthusiast, Norfolk won’t disappoint. There are many beaches to explore in and around the Chesapeake Bay along with the coastline and ocean beyond.

There are 144 miles of shoreline waiting to be explored with waterfront trails at Freemason, Sentara loop, Fort Norfolk, and Old Dominion University making it easy to stroll or paddle along.

6. A Unique Arts and Culture Scene

Norfolk is the only city in Virginia that has garnered international accolades when it comes to art. You'll find it to be full of studios, museums and performing arts. Notable theaters include Chrysler Hall and the Harrison Opera House.

The self-guided, publicly displayed art that is scattered throughout different neighborhoods contains pieces showcasing the city's rich and vibrant history.

History buffs can visit the MacArthur Memorial or explore the historical landmarks that document changes in the city.

Iconic places like Fort Norfolk and Petty Dickson House, or a tour on the Elizabeth River Ferry can provide depth and context to the city’s heritage.

Norfolk hosts signature events like the Virginia International Tattoos festival which draws visitors from all over the world. The event showcases spectacular performances from international performers.

The Annual Norfolk Harborfest, (an East Coast favorite) is the largest and longest free maritime festival in the nation.

8. A Military Town History and Flare

Naval Station Norfolk is currently the largest military facility in the world. It has 14 piers for ships and 11 hangers for storing aircraft. It can host more than 75 ships and 130 aircraft.

The naval base has 5 destroyers, 5 carriers, 7 submarines, 8 amphibious assault commands, and 4 frigates. Every year, 3,000 ships leave the base.

If you're retired military, Norfolk offers extras for ex-military personnel, like medical access to the VA hospital in town.

If you know your history, it won't surprise you that the NS Norfolk opened in 1939 during the First World War. Today, the USS Wisconsin is part of their naval museum and open to the public. You can also explore the Hampton Roads Naval Museum which boasts of 200 years of naval history.

Tags Where to Retire Why Virginia Retiring in Virgina WHY NORFOLK